In many biological tissues, it has been shown that dynamic loading can promote biosynthetic activity and prevent tissue degradation. For example, in articular cartilage, cyclical loading in the range of physiologically relevant frequencies promotes glycosaminoglycan and protein synthesis, whereas static loading inhibits this process. This type of response has also been observed in cartilage tissue engineering studies, where dynamic compression has been shown to promote better mechanical properties in comparison to unloaded controls. It is generally believed that dynamic loading may increase cellular activity via two pathways: A mechano-transduction pathway whereby cells respond to the loading environment directly, through integrin-mediated responses or molecular conformational changes transduced to the nucleus; and an enhanced solute transport pathway whereby loading increases the supply of nutrients, growth factors, cytokines, morphogens, etc., leading to greater matrix synthesis.

In an effort to elucidate the role of solute transport in dynamically loaded porous tissues, our laboratory previously extended the framework of mixture theory to specifically accommodate the interaction of solutes with the solid matrix of a tissue, generalizing the classical framework of Fick's diffusion where solutes only interact with the solvent. In this framework, two diffusion coefficients emerged naturally from the formulation, one that describes solute diffusion in free solution, involving the frictional drag between solute and solvent, and another that describes solute diffusion in the porous tissue, also involving the frictional drag between solute and solid matrix. Thus, this theoretical framework could naturally describe the well-attested observation that solutes diffuse at different rates inside a porous medium than in free solution.

An intriguing theoretical prediction emerged from this framework, which had not been previously anticipated: Accordingly, under sustained dynamic loading, this theory predicted that the solute concentration inside the tissue would rise to values far exceeding those achieved under passive diffusion (no loading). In effect, the theory suggested that dynamic loading could pump the solute from the external bathing solution into the tissue, against its concentration gradient, thereby describing an active transport process. Since this outcome had never been previously reported from experiments, we subsequently performed a series of studies where agarose hydrogels of various porosities were exposed to dextran solutions of various molecular weights, and confirmed these earlier theoretical predictions unequivocally. For certain combinations of gel concentrations and dextran molecular weights, solute uptake was enhanced up to sixteen-fold relative to passive diffusion, and results suggested that higher values could be achieved with longer loading durations. Thus, a fundamental mechanism of active transport in deformable porous tissues was discovered through these studies, initially motivated from theory. Importantly, the theory would not have predicted these enhancements in solute uptake if the diffusive drag between solute and solid matrix had been neglected; indeed, the pumping mechanism described by this theory is contingent on the solid matrix exchanging momentum with the solute.

Another interesting theoretical development introduced in our studies was the formulation of a constitutive relation for the chemical potential of solutes that explicitly accommodates the well-known phenomenon of solute partitioning in a porous medium. Though well recognized experimentally, it appears that the concept of partitioning had not been previously incorporated into theoretical frameworks of transport in porous media. In a subsequent theoretical study, we adapted this framework to the analysis of osmotic loading of cells and discovered that we could extend the classical model formulated by Kedem and Katchalsky: In the K-K model, which models the cell as a fluid-filled membrane, when a cell is loaded osmotically with a membrane-permeant solute, its volume decreases initially but eventually recovers to its initial value as the internal concentration of the membrane-permeating solute eventually rises to the external value. In our extended framework, the cell is modeled as a gel-filled membrane, where the membrane-permeant solute may be partially partitioned out of the porous gel (representing the cell protoplasm). A consequence of this partitioning is that the cell does not recover its initial volume at steady state, since a smaller cell volume is required to match the internal and external solute concentrations.

Thus, our theoretical framework predicted that partial volume recovery following osmotic loading with a membrane-permeant solute could be explained by passive mechanisms (solute partitioning). Prior experimental studies either overlooked this partial volume recovery or attributed it to active transport processes known to regulate cell volume. To verify that our theoretical framework described a feasible mechanism, we conducted osmotic loading experiments on alginate beads, using dextran solutions of various concentrations and molecular weights and confirmed that partial volume recovery could indeed occur even in the absence of a membrane and active membrane transporters, in a manner fully consistent with the theory. We have since applied this framework to analyze the volumetric response of chondrocytes to various osmolytes with similar success.

The experimental studies on the partial volume recovery of alginate gels and chondrocytes in response to osmotic loading are a significant component of the dissertation of Michael Albro.

A critical concept emerging from these studies is that suitably formulated theoretical frameworks for solute transport in porous deformable media may motivate novel hypotheses relevant to the study of biological tissues and cells, and guide the design of experiments to test these hypotheses. When combining solute transport with porous deformable media, we find that theoretical frameworks are still under development, since basic concepts long recognized from experiments (such as hindered solute diffusion, and solute partitioning in a porous medium) can be incorporated in a variety of ways into theory, sometimes yielding new and unexpected predictions. 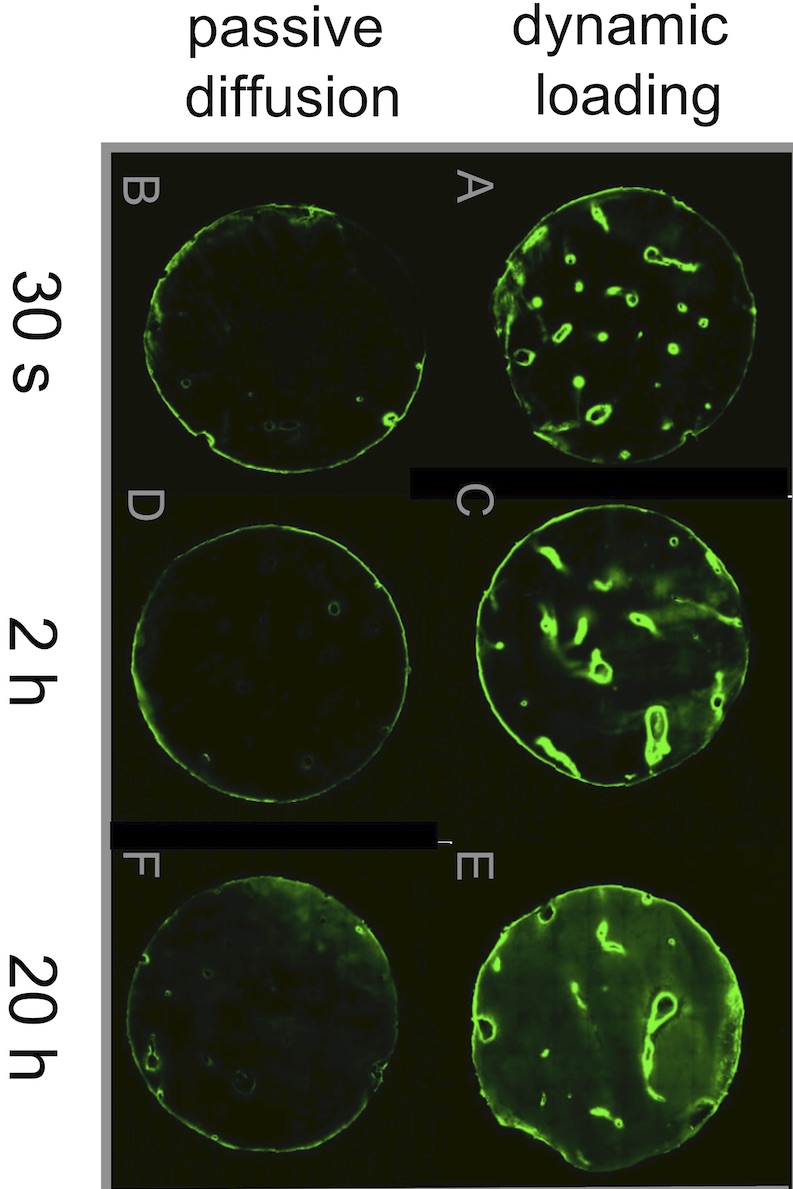 Past
Back to Top